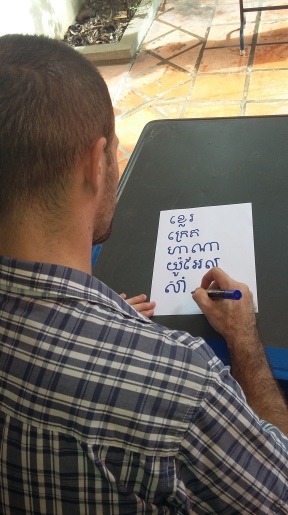 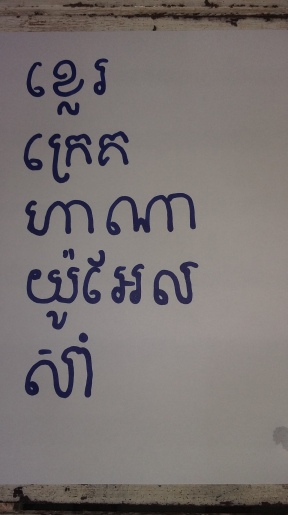 Can you guess who is who?

Below is another visual representation of where my language is up to since the last update .

So where is my language learning up to now? Earlier this year I passed an exam which identified me at the level of being able to get the main topic of a conversation. I now feel I have more ability in getting the main idea, whereas before I was more just hearing connecting phrases (and, so, then, but etc). However, I’m still left guessing from context and other cues about what is actually being said about that topic. This is a start. The task now is to grow in my listening ability which includes using other listening tactics more, like listening for emotion and body language, to guess what is being said about a topic. You could sum up my listening abilities currently as an educated guess. Picture me having a 3 year old’s vocabulary and listening ability and you’ll have me pinned.

What this means for conversation is that I have the foundations set. I feel much more confident with fairly mundane questions and answers about myself and others (family info, where I live in Phnom Penh and how long I’ve been here). What’s next is taking those educated guesses and exposing myself to lots of conversations. Only, the trick is not to go for perfect understanding, but more … going for the gist, the vibe, the mabo.

The danger at this stage is that I’ll want to work out each little bit that I don’t understand. While clarity is a good thing to have, stopping at each point that I don’t understand will slow conversations down to the point of non-existence. That is, if I get so fixated on one detail I’ll actually miss the chance of experiencing conversations. One fellow language learner, who is a few modules ahead, affirmed this ‘guessing’ over ‘stopping’ approach. What I miss in trying to understand every new word is the bigger picture–the forest gets lost for the trees. So I need a bit more ambiguity tolerance required here as I listen.

Last time felt that my listening was far worse than my speaking. That may be the case. What I think is far more likely is that I probably had an over-inflated sense of my speaking ability. What I feel like now is that I’m starting to get to the point where I understand more when I listen, but now don’t have the words or ability to express similarly to what I am hearing. So that’s where my listening and speaking is up to.

I’ve also started to learn the alphabet and some basic reading rules. The trickiness is that learning new reading rules for a new alphabet is like a double whammy. It’s not like I’m just learning a new maths equation that I can apply to a number system (1,2,3…etc) that I know so well. It’s like trying to learn a new rule for a completely different number system that is still quite new to me–so which order do ថ​តេរតសដថងសង​ go in? My brain is doubly strained. First I’m trying to remember the new rule and then trying to apply it to a system that is not familiar either. Weak consonants follow strong consonants, but which ones are the weak ones again and which are the strong?

On a more positive language note, I’ve been noticing that as I use more Khmer phrases at home, my kids are picking some of these up. They can ask for things in Khmer and describe their preferences. But far above anything else, my kids all love to say ‘no’ to me in Khmer. Another positive is that my pronunciation seems to be improving. A friend of mine commented on my clear pronunciation (a product of our school). On the family side, my kids are no longer pulling me up on saying the number ‘one’ incorrectly–within two weeks of us arriving in Cambodia they knew that I was mispronouncing ‘one’. So either I’ve improved in my pronunciation or they’ve given up correcting me. Both are possibilities.

What I’m looking forward to about the next few modules is working at increasing my fluency in both reading and conversations. Part of this will come through practice–in a sense doing what I can do now, but slightly better and slightly faster. It feels like these first four modules have given me the basics and now its time to build on them.

Another thing that has happened in my current module at language school is that the teachers have phased out the IPA (International Phonetic Alphabet). Not completely, as I’m sure I’ll still use it in some way. But now we are being taught new words in Khmer script, rather than using the IPA. This means I rely heavily on remembering the Khmer script.

Finally, my Khmer will improve as I build my Khmer word vocabulary. I currently have about 1000 words in my vocab that are usable. I’m back at the daily ANKI1 slog (which I love). I remember someone saying, somewhere, that to read a newspaper in a foreign language you need about 2000-3000 words. This is what I’m aiming for by the end of the year or by the beginning of next year.

So that’s roughly where I’m up to. The result of all this is that I’m really enjoying the interactions I’m able to have with locals as I build relationships and seek to point them towards Christ in not only my actions, but also in my Khmer.