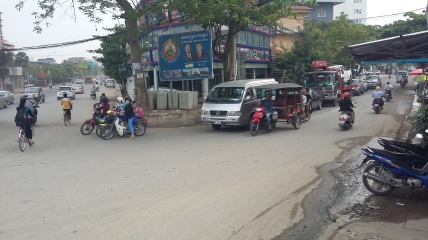 It may not look like it, but down to the right is one of two small slopes that I encounter in very flat Phnom Penh.

A word picture of what it’s like to ride, with some actual pics to give you a sense of the traffic. I’d love to do a go pro of my ride to language classes some time.

So you’re at a traffic light in Cambodia. The light goes green, but it doesn’t mean go. It’s an almost go. You’ve gotta wait for the last stragglers, but sometimes that’s up to 10 or so motos going in front of you. ‘Stop says the red light, almost go says the green…’ Then you’re off. The beauty of the bike is that you’re often off first–like the bikes in the picture just below. 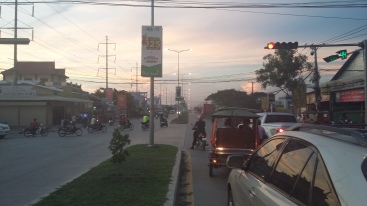 Sidling up along the cars in order to get to the front and turn left first.

My suggestion is to go with the flow… go with the flow of motos like a river current running down stream. But like sport, the clear spots are often the sides. Don’t go down the middle (most of the time anyway), its often congested; spread wide to the wings. If the motos go to the left side, then go left, though watch for oncoming traffic. If they go the right, go right, though watch for oncoming traffic as the right side is the place to slip up the opposite side of the road if that’s more convenient. The motos may even go way right. That’s okay too; the pavement provides some extra space. And my mountain bike means I can go even further right than the motos, so often a good mountaineering option.

My decision, do I go to the left of the car, or the right? Or do I just jump on and have a rest as well?

In the end a bit of duck and weave is my preferred style. Usually this is more around standstill traffic. Though I need to get good at breaking. It’s not so much the stopping from high speed braking, but more the constant and very low speed braking, while staying on your bike and not putting your foot down in order to be ready to roll when the traffic does. Since riding more on the mountain bike I’ve become a fan of Danny Macaskill, though I don’t have near as much skill, nor do I attempt anything like he does. My biggest step up is a rather largish curb side pavement and I’m really yet to do a proper bunny hop.

For a more thorough description of traffic life in Cambodia, see this hilarious this post by another blogger (with great visuals).