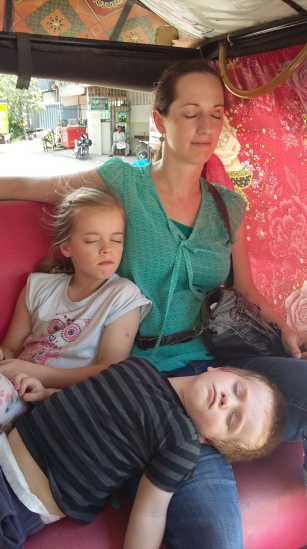 Decisions made, now we can rest. (Only one is not actually resting. Who is it?)

I think we are past the initial set up and settling in period–that time with tonnes of choices. What we’ve moved onto is a time where we are living out those choices or living with the choices and their consequences (not necessarily a bad thing) that arose from the decisions we made when we first arrived. Some of these decisions were intentional and purposeful, like our go slow approach (see next weeks post) that flows from the idea of vulnerable mission. Some of the decisions seemed more to be related to circumstances, reacting to life, like Joel’s preschool closing down (originally chosen because of the Khmer influence he would receive there), and so us moving him to preschool at the girls school (with less Khmer input but other positives).

So we’re in a time of less choices, or a time of seeing how our first choices play out. Some of the angst around making those initial, and seemingly bigger, choices is gone. I read over some of my earlier journal entries from the beginning of this year and all of the questions that I raised for myself; some of them have been answered. Some of our wonderings that we had prior to coming to Cambodia have also been answered. So we are in Cambodia in a period that you could call ‘decision decrease’  instead of ‘decisions galore’.1 But as we look back we can get a glimpse of how God has been guiding us and answering prayer in different ways from what we had expected and also in ways that we had. He has been at work through our decisions.