This first hypothesis is almost an introductory post as well. The next post will move forward in what our mission approach will look like. This post stands back a little and surveys the recent history. Surveying the recent changes in mission ‘strategy’ (for want of a better word) sheds light on our particular approach in Cambodia. In this survey I’ll be making gross generalisations and may misrepresent many things. Please contribute and sharpen my thinking where I’m off the ball.

There has been a shift in mission thinking and approaches to mission. You could characterise the older style of mission approach as closer to colonialism and dare I say it, ‘the West is Best’ approach. This is not to denigrate previous mission thinking but to summarise it. What we’ve seen occur in the last century is a shift from mission being from the ‘West to the rest’ to ‘from everywhere to everywhere’. Another way to put it is from one centre of mission to, what I heard from a mission friend, a ‘polycentric’ approach to mission (multiple sending areas). Here I’m delving into topics that I am only a novice in and much more has been written and is still being debated up to this point.

While I’m confident on the fact that there has been a change in approaches to mission, I’m less confident on the causes or explanations. Has the change in mission centre from the West to the Rest coincided with the shift from colonialism to globalisation? 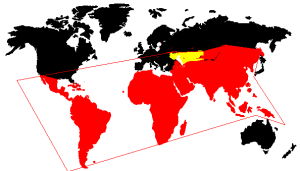 How much does the growth of the church in the ‘global south’ (a term used to describe areas of the world that fall in the southern hemisphere, but also as a category to distinguish from the developed West) play into this change? My guess is that the ‘global south’ growth is a major part of this change, of which there are probably many reasons or causes.

I’m sure there is much written on this topic that I should have consulted. Nonetheless, the result of this change in our mission approach (whatever its causes) will become clearer in the following posts in this series.